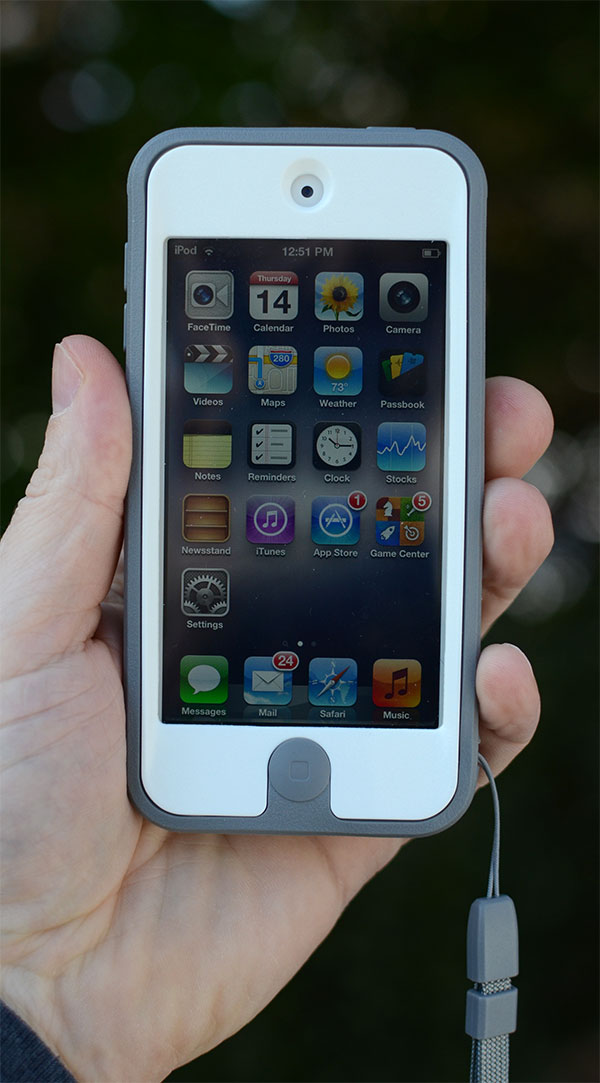 The company that seems to be synonymous with serious, rugged protection is back again with the OtterBox Defender iPod touch 5g edition. These cases were initially designed for those who worked in non-gadget friendly environments, but have found a niche with parents who are looking to avoid the dreaded (and costly) trip to the Apple Store to repair a damaged iPod touch. The release of this case comes months after the release of the fifth generation iPod touch, so is it worth the wait. Read on for our comprehensive OtterBox Defender iPod touch 5G review. If you are not familiar with the design of the OtterBox, it might appear to be some sort of Rubik’s cube attempting to figure out how to disassemble it. Using your fingernail, you can peel back the silicone layer which is separate from the hard shell. Save for the black case, these cases are two tone, making it easier to figure out the two parts. With the silicone removed, you’ll find a hard shell that if left by itself would look scary, but it’s all part of the three part system. OtterBox has gone to provide the utmost in protection.

The inner shell is composed of a seriously hard plastic and snaps together using a total of six clips on the sides and top. The bottom also has a clip, but it’s not as obvious and is missing one of the arrows that helps to guide the case construction. This provides for an extremely snug fit for the iPod touch 5g. There was zero movement of the iPod touch when it was installed. The interior of the hard shell has foam based padding where the back of iPod touch sits. The OtterBox Defender gets thicker and slopes outward at the top and bottom of the iPod touch by the home button and Facetime camera. There is also a significantly sized bezel around the entire iPod touch. Also incorporated into the hard shell plastic casing is a plastic screen protector. The same material is used to cover the circular cutout that allows the Apple logo to be viewed from the back. One of the features of the new iPod touch 5g is the inclusion of a wrist strap. The OtterBox Defender covers the wrist strap, but not all hope is lost. It comes with a matching wrist strap that attaches on the side of the case. The strap itself is adjustable and I was impressed by the quality, if lanyards are your thing.

The case all comes together via a silicone layer that neatly wraps around the hard plastic for what OtterBox calls three layers of protection. It’s hard not to be impressed with how the silicone falls right into place, with the final case feeling incredibly solid. Exposure points to dust and other elements are limited to the camera, speaker and the Facetime camera. There are two areas which have silicone plugs for the 3.5mm jack and Lightning connector. You can easily peel these back and access those ports with ease.

Some key points here for those considering this case. It is not the case for those who are enamored with how ridiculously thinness of the iPod touch 5g and would like to keep reveling in owning an amazingly thin and powerful device. That being said, this is not an inexpensive device, with the cost of starting at $299 for the 32GB iPod touch.

From a usability standpoint, the cost is obviously the bulk this case adds. It feels roughly about the size of an iPhone 4S with a bumper. The tradeoff is that you are investing in a case that will provide you with the best protection against damage. When I say damage, there is a zero percent change of any scuffs or scratches happening to your iPod touch. No case can guarantee that a screen won’t crack. There are just too many factors in play. The triple layered protection uses materials that aid in shock absorption. The way they’ve designed the case to slope outward, chances are the case will take the brunt of any calamity.

The four silicone covered buttons are tougher to press than if your iPod touch was uncased. Over time, this would likely become the norm and you’ll get used to pressing down a little bit harder.

The screen protector was surprising clear. When powered on, there was virtually no difference how crisp and vivid the display looked while in the Otterbox. There is a slight gap between the screen protector and the display. While I’m not a fan of the sound of tapping plastic, the touchscreen was plenty responsive. At times, as with the buttons, I needed to exert a bit more pressure. Those seeking precision tactile response while gaming might find the screen protector to be off-putting. The OtterBox Defender is no longer just a case for those taking their devices to a construction site every day. With the cost of an iPod touch 5g at $299 and up, the need for rugged protection extends to everyone. The triple layer protection results in some added bulk, but that’s a small price to pay for what is the ultimate case for protecting your iPod touch 5g. If you have young kids, work in a rugged environment or simply want the highest level of protection for iPod touch 5g, look no further than the OtterBox Defender.

The OtterBox Defender for iPod touch 5G retails for $39.99, but can be found for around $30 and up at Amazon, depending upon color choice. It comes in coal (black), boom (purple), glacier (gray) and punk (navy).