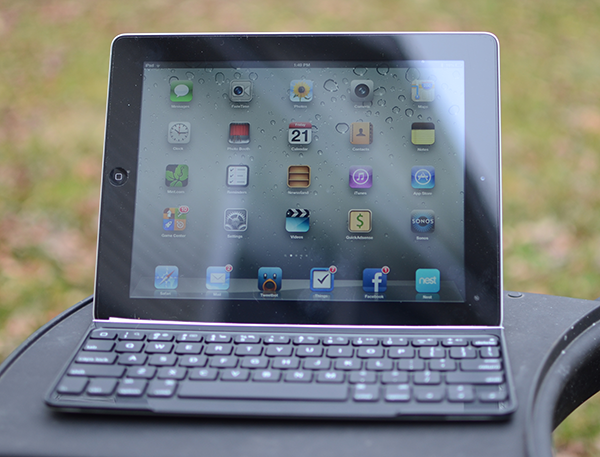 As a writer, my preference is for a physical keyboard. That’s my primary tool for content creation, tethered to either a Mac Pro or a Macbook Air. So, what if the iPad had a keyboard, would it be time to change camps. Read on for my full Logitech Ultrathin Keyboard Cover review for iPad. See if it’s made me a believer and more importantly, if this iPad keyboard accessory is right for you.

Keyboards for the iPad aren’t necessarily anything new. With support for Bluetooth, keyboards have worked for years. You could utilize any full sized keyboard, but that would require combining it with a case that can double as a stand. Logitech had this crazy idea that combining the two would result in an accessory that would double as a case along with making it easy to take your keyboard on the go with you.

The Ultrathin keyboard is similar to Apple’s Smart Cover, in that it has a hinge that uses a magnetic clip to attach to the side of the iPad. The back of the keyboard case looks very much like the back of your iPad, with an aluminum backing. It provides for a consistent look with your iPad. From the hinge inward, the case gets thinner as your reach the bottom edge of the keyboard. The keys themselves sit recessed in this black shell. On the right hand side of the keyboard is a power switch and a button to engage Bluetooth pairing. There is also a microUSB port, which can be utilized to connect and charge the keyboard. About an inch from the back of the case is a curved cutout where the iPad sits. Set-up of this keyboard could not be easier.

This process was painless and completed within a minute or so. Once you pair the keyboard once, you do not have to repeat this process.

When not in use, the iPad easily connected to the hinge. The Logitech keyboard supports the iPad’s sleep/wake feature. As you close or open the keyboard cover, the iPad will turn on/off. This work as intended. When you open the cover, there really aren’t many options, or I should say there is one option. Whereas the Smart Cover allows you to keep the cover attached, you can fold it back behind the iPad. With this cover, you need to remove it from the iPad. You cannot use the iPad with the Keyboard Cover attached. If you lift the iPad with the hinge attached, the magnet is not strong enough to hold it together. Part of me things this was done on purpose to prevent users from thinking they can use this like Apple’s Smart Cover. This can be slightly annoying, since you have to put the keyboard aside when not using it. The uses of the Logitech Ultra-thin as a case are extremely limited.

When you are ready to use the Logitech, your iPad (iPad 2, iPad 3, iPad 4) slips into the gap. You can place the iPad in either portrait or landscape mode. I found setting the iPad horizontally on the cover created a secure fit, which resulted in a pairing that could rival a ultra-compact notebook. In portrait mode, I thought the iPad felt a bit unstable, with the iPad being a bit top heavy. I tend to use my iPad on my couch, which isn’t the most stable location. This was a very comfortable and stable solution in landscape mode.

When using this combination, there are many times where you have to interact on-screen. This did feel a bit uncomfortable, with a bit of a strain on my wrist, but that might go away over time. What this creates essentially is similar to the new generation of Microsoft Windows 8 laptops that mix touch with a keyboard. It’s not bad, but certainly different.

Those shopping for this case are looking to move away from the virtual keyboard for the physical keys of the Logitech. I’m a fair to average typist and my accuracy was on par with my typing on the MacBook Air or full-sized Apple keyboard. During the first minutes with the keyboard it felt a bit small, but as I started typing it immediately became second nature. The chiclet keys were very clicky and responsive. In addition to it easily attaching to the iPad, the Logitech Ultrathin Keyboard Cover has a number of other features that make it a suitable companion for the iPad. At the top left is your home button, which acts just like the home button on your iPad. You can get to your home screen or engage multi-tasking with a double-tap. To the right are a number of function keys, all of which work with the iPad. You can increase/decrease volume, use the clipboard, search and more. If you fancy the onscreen keyboard, you can use the function key to call bring it up.

In many ways, the keyboard morphs the iPad into a laptop-like type device, providing many of the capabilities of a small laptop, with a retina display and all the battery life that comes with an iPad. For those who are heavy into writing, it’s an ideal solution. There are a number of great applications for word processing and blogging. My workflow is to create content within a text editor and then transfer it into WordPress (content management system used on our site). I recently purchased a wonderful software application titled ‘Byword’ for Mac. It removes the clutter and allows the focus to be on writing. I was taken with the app that I decided to order the iPad version, consumption device be damned. Using iCloud, it allows me to easily move between devices, having all of my content immediately at my fingertips.

Conclusion
For those who either already make heavy use of word processing apps or looking to transition from consumption to content creation on the iPad, the Logitech Ultra-thin keyboard is a great option. The Smart Cover type cover has minimal uses and won’t provide any suitable level of protection for your iPad, but will keep the keyboard handy. A slipcover like the rooCASE Super Bubble Neoprene Sleeve Case Cover is probably a good purchase if you pick up this keyboard and have plans on using it extensively. I’m guessing that the Logitech keyboard will become a useful iPad accessory that will have you using your iPad at coffee shops, tables and the couch. You’re safe on the couch, but placing this down on assorted hard surfaces could result in scratches. Logitech doesn’t offer any sort of protector for the Ultrathin Keyboard, which is disappointing given the price point.

The Logitech Ultrathin Keyboard Cover retails for $99.99, but Amazon sells it for around $79. Refurbished models can also be had for around $69 at retailers like NewEgg.