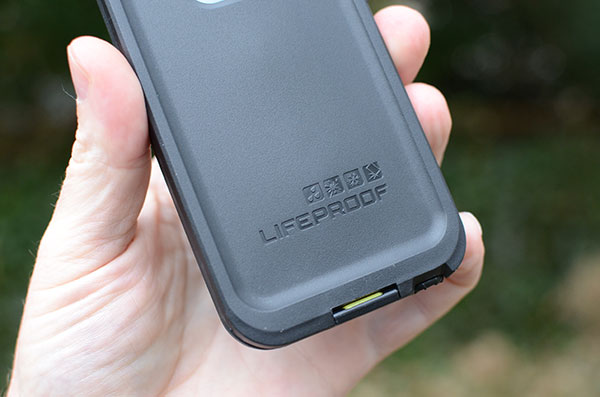 More and more people are looking for cases that provide the utmost in protection,  allowing them to remove restrictions on where they can take their iPhone. LifeProof has been one of the companies that has been a pioneer in this case category. While LifeProof cases have a natural appeal to those who enjoy extreme sports, these cases are also suited for those who simply want maximum protection for all life throws at them. Water, Dirt, Snow and Shock. Their latest case is the LifeProof frē, designed for the new iPhone 5. So how does it measure up to the elements? Read on for our full LifeProof case review for iPhone 5. For user opinions, check out this forum discussion with hundreds of Lifeproof users.

Unlike other cases, there is a fair amount of preparation that is required before you actually install this case on your iPhone. As someone who typically likes to dive in without reading instructions, this is not a situation where it’s even a remotely good idea to not follow the guidelines set forth in the manual. If for some reason you do discard the manual, the big CAUTION decal on the back reminds of the proper steps you should take for using this case. 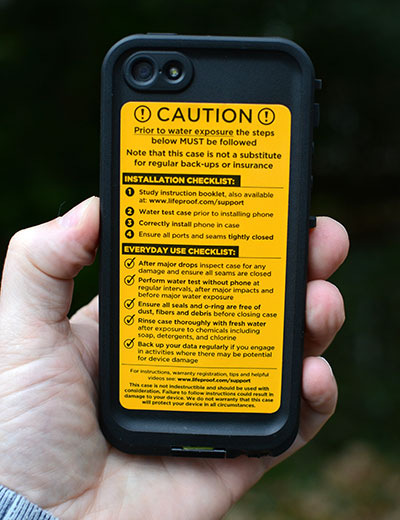 The LifeProof has what they call O-rings which border the entire bottom of the case, enabling the case to be waterproof up to 6.6 feet. The directions aren’t terribly clear as to what part are the case are the O-Rings (it’s the green gasket material that runs inside the bottom shell), but you are supposed to check and remove any dust or debris. To assemble the LifeProof, you snap the two pieces in place, close the charge port door seal and screw in the headphone jack cover. The first time you assemble the case, it should be done without the iPhone, allowing you to safely conduct the water test. I submerged the case in a bathroom sink for 2-3 hours with a mug on top to keep it underwater. This water test is not only suggested, but required by LifeProof. It should be noted that LifeProof tests every case they make and then an independent agent does further testing with selected cases undergoing a second water test. By the time you complete your water test, it’s either the second or third test. Having passed my water test, it was time to entrust the safety of my iPhone 5 to the LifeProof frē. Installation at this point is similar to other snap-type cases. You drop the iPhone 5 into the face forward into the case and then snap on the back shell carefully making your way around to ensure it’s tight throughout. Finally, a quick snap of the lightning door latch and screw in the headphone jack cover completes the install.

Like so many, I carry my iPhone everywhere. If it’s not in my hand, it can be found in my front pants pocket. Before installing the LifeProof, there were a number of times during my recent vacation that I reached for the front pocket of my swim trunks for fear I had brought it in the pool. While I was fortunate, there are a number of folks who haven’t been so lucky and have had to take steps to bring their iPhones back to life after it came in contact with water. It made me realize why the appeal of waterproof cases extends to everyday folks. Water tests concluded, it was time to go swimming with the iPhone. The risks are spelled out on LifeProof’s website.

LifeProof warranty does not, under any circumstance, cover the replacement or cost of any electronic device or personal property inside or outside of the case.

As you can see in the video, I went swimming with my iPhone 5 using the LifeProof frē. The iPhone having been submerged in water, I towel dried the LifeProof case to see if any water had seeped into the case. Everything appeared to be completely water-free. Removing the case later that evening, I didn’t see any signs of water on the inside of the case. I will say that when I removed the case, there was some water on the edges of the case. While no water was to be found on the inside, it can still find its way to the iPhone if you are not careful when removing the LifeProof. It’s natural to want to check your iPhone after its first swim, but it’s probably not a great idea to continue taking the case on and off. While there is no indication that will adversely affect the case, there is a greater chance for error when repeatedly installing the case. The LifeProof frē can withstand water and snow. They official rate the case as IP-68. When reviewing IP rated enclosures, the IP68 classification means: 6: Dust tight 8: Protected against prolonged effects of immersion under pressure.

This isn’t purely a waterproof case being offered, but case designed to take on life. Using a heavy duty hard plastic, it meets the Military Standard 810F-516 standard specific to functional drop. This translates to the LifeProof providing protection from damage for drops up to 6.6 feet. On the interior walls, you’ll notice small foam inserts that provide an added shock absorption in the case of the drops. Two of these came off when taking the case in and out. The company makes a point of letting customers know that while the case is a precision piece of equipment, it should still be used sensibly. The idea here is not to install the case and then test it by dropping it 5 feet or more. No case is indestructible and neither is your iPhone. That being said, this case should go a long way towards protecting your iPhone in the event of a drop.

There is a plastic cover that projects the screen. I was very impressed with the fit, as I’ve seen other implementations where there was a noticeable gap between the screen and the plastic protector. This screen protector requires you press harder than you normally would, but response was quite good. At certain angles, there was a slight rainbow effect, but this was more noticeable with the display off. From what I’ve described, one would think it might require a big, bulky case. This isn’t much bigger than some of the standard case designs from other manufacturers. If anything, it’s taller than most, due to the headphone cover and lightning seal which add depth to the bottom of the iPhone.

The volume up/down and ringer/mute switch work perfectly well, but you will have to press harder, a function of the girth of the case. The Lightning dock connector is easily accessed by snapping open the cover. The same cannot be said for the headphone jack and I can see the cover getting misplaced with ease.

The LifeProof also comes with a special adapter, should you want to pair it with headphones, while keeping the seal tight.

During my tests, I made several calls and callers had no problem hearing me. I did however have what I’d call a major issue with a buzzing sound that would occur during calls. It’s almost as if I had received a notification while the iPhone was set to vibrate. It would occur on and off throughout my calls. I thought perhaps the iPhone itself might have had an issue, but the problem was gone when I removed the case.

When it comes to protection, the LifeProof case for iPhone is in a class by itself, one that will start to get a bit more crowded with similar products coming this year from Incipio, Otterbox and Griffin. If you take the proper steps to test, this would seem like an ideal case for someone who enjoys outdoor activities and sports. Any time you take your iPhone to extreme conditions, there is some level of risk, so the LifeProof isn’t a replacement for a warranty. Regardless of how impressed I was with the protective qualities of the LifeProof fre, I simply cannot recommend a case that suffers from significant poor audio quality during phone calls. While it’s possible this has been corrected, our final rating reflects the case as tested. Should we have the opportunity to test a LifeProof case that corrects this issue, we’ll append the review as necessary.

The LifeProof fre case for iPhone 5 retails for $79.99 and can be found at major online retailers including Best Buy and Amazon.