As the iPhone accessories market matures, we’re starting to see more that depart from the usual speakers, case and dock trifecta. The UP by Jawbone is both a departure for the company and a fairly new sort of iPhone accessory — one that promises not just more convenient tech, but a better life. Read on for our full Jawbone UP review.

The UP is a wristband that’s meant to track daily life — sleep, diet and activity. Designed by Yves Behar, it’s a lovely looking piece of technology, one that will complement any casual look. It pairs with a free iPhone app that keeps all that info trackable and easy to read. It stays fairly clean of sweat and debris, and is water resistant enough to be worn in the shower. It seems like the perfect solution for convenient health and habit tracking. Should it find itself on the wishlists of everyone who plans to write a list of New Year’s resolutions this month, then? Sadly, probably not.

The biggest problem with the UP is that sometimes it simply doesn’t work. Jawbone hasn’t addressed the exact failure rate, but a look at the device’s support forums shows several problems, from caps that pop off too easily to completely unresponsive units.

Many users have found the UP problem-free, though, and I count myself among them. I’ve been wearing the wristband for two weeks now and haven’t encountered a single glitch. It’s been a good experience, overall. I just wouldn’t say it’s changed my life. 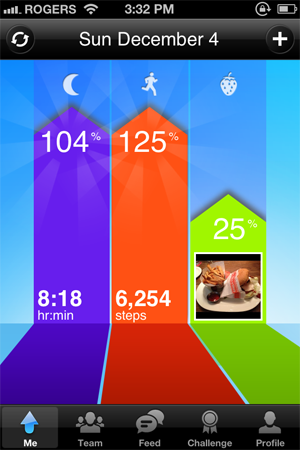 As it turns out, the UP is better at some of its tasks than others. For example, it’s an impressive activity tracker — as long as you mostly walk or run. Any activity that has you swinging your arms will be tracked, but while riding a stationary bike I may as well have been watching a film from the couch by the UP’s standards. On the other hand, it’s great at tracking walks. I’ve found myself taking the long route more and more for the reward of beating my goals each day.

Similarly, the UP is great at getting you out of your chair. If you spend your working hours at a desk, you can set the UP to vibrate every so often if you’re inactive – a gentle reminder to get up and move around. I have it set to buzz me every thirty minutes during daylight hours, and I try to get up each time and move around. It keeps the blood flowing and is a surprisingly good way to stay on track. As a food tracker, however, the UP is about as successful as you could expect a bracelet to be. The device has no food tracking capability — it’s all in the companion app. It’s also seriously underpowered. The app gives you the opportunity to photograph your meals. A short time later it will push a request that you mark down how you feel.

Without calorie tracking this is of minimal usefulness. That the options for states are extremely limited (a handful of happy and sad faces that indicate fullness, energy and sleepiness mostly) drops it down to largely useless. I’d hoped that it might be a good way to track down food sensitivities, but there’s no useful information to be gained from knowing that a bagel made me feel “ok.” Also, while the Jawbone UP itself is unobtrusive, pulling out my phone to take a photo at every meal often feels like a hassle that isn’t rewarded. Sleep tracking, on the other hand, is a great feature of the UP. You can set a smart alarm with the app and sync it to the wristband. The UP will track your sleep overnight and wake you within a half-hour leading up to that alarm time, when you’re sleeping lightly. The wristband vibrates repeatedly and insistently, turning off only when you push the button on one end of the device. In my time with the UP, I’ve found waking easier. Rarely do I wake up in the midst of a deep sleep these days.

The smart alarm is a fantastic feature if you share a bed, as it’s far more subtle than any audible alarm clock. If you’re the type of person who can’t wake without multiple trips to the snooze alarm, though, watch out — once you tap the alarm off, it’s off for good. It’s also not ideal for those who wake at different times on different days. The app lets you select the days you want the alarm to go off, but with only one wake time.

Still, syncing the UP to change the alarm is a simple task, and you’ll be syncing regularly to track your activity anyways. There’s a cap on one end that hides an audio jack. To sync, you pop it into the phone while you have the app open — it will upload your activity, download your alarms and let you know if the wristband needs charging. If it does, the UP comes with a USB adapter that can be used for charging. Jawbone claims the UP can go 10 days without charging, and that’s been true for my short time with the device.

The UP app is an elegant way to track your activity, sleep and meals, but don’t expect to get any serious metrics out of it. You can’t easily compare your results over time, so you’ll never have more than a general sense of whether you’re becoming more active or sleeping better. I’d hoped to get a good look at my sleep cycles, to see if I’d be better suited to hit the hay earlier or later. No such luck — it’s impossible to tell what time your light and heavy sleep cycles hit, so you need to go by the general “sleep quality” index the app provides. Where the app does excel, however, is in its social integration. Life improvement is always easier with a little moral support, so if you can get a team together to tackle sleep and activity goals you’ll have much more motivating you than the solo UP user. You can share your progress and tracking with your friends passively, so they’ll know exactly why you’re so moody when you’ve only had four hours sleep and skipped breakfast.

The UP is a first-generation product. With refinements to its reliability and more thought put into its tracking and output, it could make a fine life tracker. As it stands, however, it makes a great $99 silent alarm, and a slightly less useful pedometer. Until the problems with the hardware are resolved, it’s probably not worth the risk. Once they are, I’d go forward cautiously. The UP isn’t a life-changing device, but it can help you improve your life in small ways if you’re willing to put in the effort.