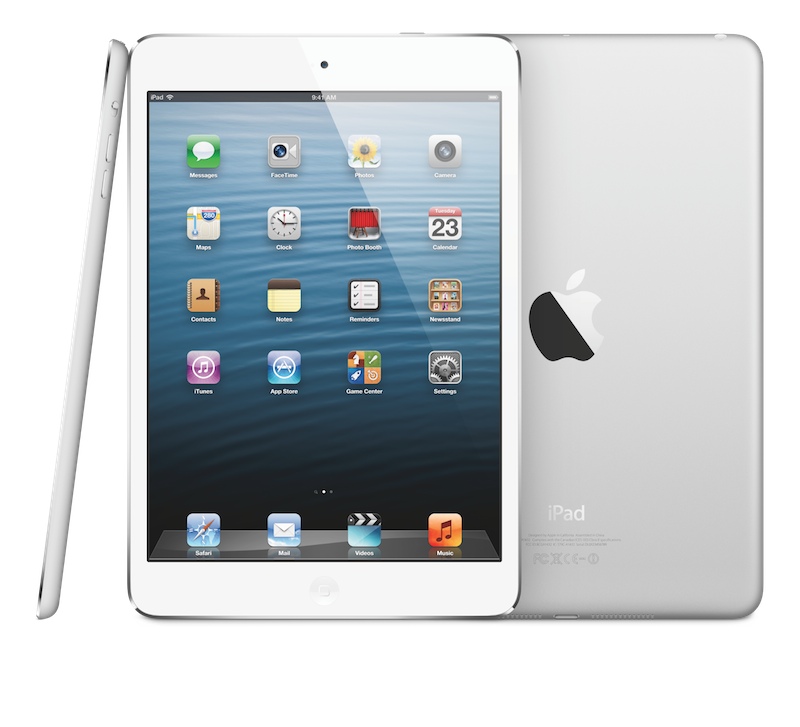 Apple today announced their foray into the small tablet market with the iPad mini. What they did not do was offer up a low-cost tablet in line with pricing of their competitors, which include Google’s Nexus 7 and the soon-to-be released Amazon Fire HD. Despite rumors to the contrary, the price of admission for the entry-level iPad mini is $329 for a 16GB WiFi only model in either black or white. Some will call this the Apple tax, but there are a number of legitimate reasons why it’s worth spending $129 more on the iPad mini than either the Google Nexus 7 or the Kindle Fire HD. Thinner & Lighter
The iPad mini is 7.2mm thin and weigh 312 grams. How remarkably thin is the new mini. The Nexus 7 is 10.45mm and weighs 340 grams. The equally rotund Kindle Fire HD is 10.3mm and tips the scales at a whopping 395 grams. Those are big differences. If you plan on using this device to read books, holding your tablet with one hand, then size matters.

Bigger Display
Both the Nexus 7 and Kindle Fire HD offer quality displays, both of which are 1280×800. The display on the Nexus 7 is 216PPI (pixels per inch), significantly higher than the 163 PPI of the iPad mini’s 1024×768 display. When you compare the size of the displays, the 7.9-inch display of the iPad mini is a significant difference vs the competitors. While it might not seem as much when you compare 7.0 to 7.9, the actual difference is 21.9 sq. inches to 29.6 sq. inches. This represents a 35% larger screen than a 7-inch tablet. Ecosystem
Everyone from the various platforms like to talk numbers and there is always an emphasis on apps. Apps sell tablets. Apple announced today that the App Store is home to over 275,000 apps specifically designed for the iPad. If you are new to iPad, than you should know that iPad apps often take advantage of the added screen real estate to provide a more robust user experience. When the iPad was first announced, the joke was that it was a giant iPhone. Apps would look the same, but bigger, Without great developers, that might very well have been the case, but it’s not. So many apps now have pushed the envelope, creating apps that feel familiar to versions found on the iPhone, but find ways to improve upon them. Having extensively used an Android tablet, I can say without pause, that the app landscape for tablets is no where near the iPad.

Cameras
I’d be lying if I said I take pictures with my tablet, but if I did, it would be with the iPad mini when compared to the others. The Nexus 7 has a 1.2MB front facing camera that’s good enough for video calls, but no back camera. Same goes for the Kindle Fire HD. No back camera, just the front facing camera for calls. Apple FaceTime HD front-facing camera is also 1.2MB. If you plan on making video calls to another iPad, iPod touch, iPhone or Mac, there simply isn’t an easier software application for video calling than using FaceTime. Now not everyone has compatible hardware, but you can also download Skype from the App Store. About that rear camera on the iPad mini. It’s a 5 megapixel camera which will shot at a f/2.4 apeture and provide for 1080p HD video recording.

No Ads
In order to get that $199 price from Amazon, you have to agree to have a lockscreen display with “special offers” and “sponsored screensavers”. Apple would rather set fire to their entire inventory of iOS devices then ship them with software that runs ads when you turn them on.

Capable Storage
To pick up the Google’s Nexus 7 for under $200, you’ll need to opt for the 8GB of storage capacity. When you consider the space required for the Android operating systme, that leaves you with roughly 6GB of usable space for your music, movies, books and apps. Trust me when I say you’ll burn through that rather quickly. Too quickly. Some Android devices offer expandable memory, but it’s not an option on the Nexus 7. There is no way to upgrade your internal memory, so it’s vital that any tablet you purchase should have a suitable amount of storage.

Bottom Line
Depending upon your needs, which might include keeping your budget under $200, the Google Nexus 7 or Kindle Fire HD are both very good low-cost alternatives. Google’s Android operating system offers a number of personalization features that are simply not available in iOS. The Nexus 7 in particular is slated for an update to the product line, which could result in greater storage capacity at current price points making it a more enticing choice.

When comparing the iPad mini vs Nexus 7 vs Kindle Fire HD, you can expect to pay a premium for Apple’s tablet. The iPad mini might not be for everyone and the pricing might put it of reach. Not everyone is going to use their tablet on a daily basis and pricing of the iPad mini puts it above the threshold of an expense that might be taken lightly.

Could they have charged $299 and took a little less profit? Probably. They also could have shipped an 8GB model, helping them reach that pricing plateau where it’s easier to absorb the expense. It would have brought with it a lower price, but would have been an exercise in frustration for users running out of space. The entry level iPad mini with the features I’ve outlined above translate to real world advantages making it worth the $129 premium over the current crop of 7-inch tablets. If your budget allows for the jump, the wide-ranging feature set is certainly money well spent.