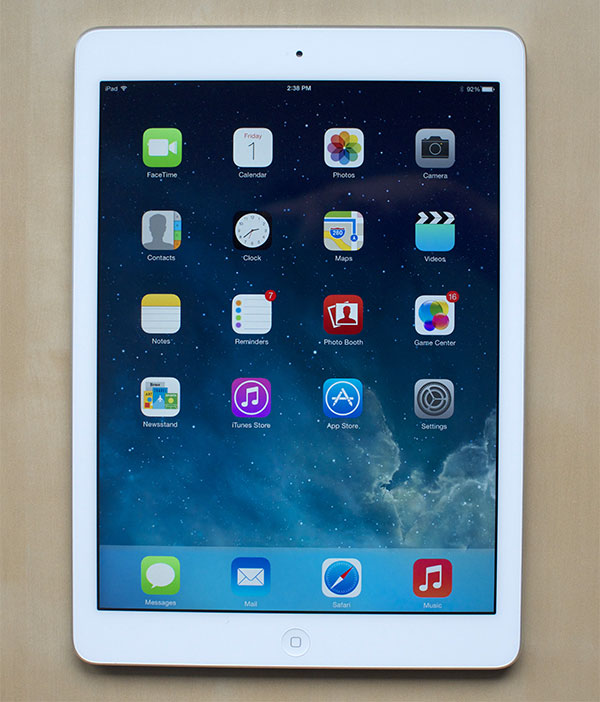 Apple’s full-sized iPad is back in a big way, with a major reduction in size, and a new name. To help drive home the drop in weight, the 5th generation is being marketed as the iPad Air, all part of a reboot of their 9.7-inch tablet. When the third and fourth generation iPads were released in 2012, they were the only retina models available, providing them with a definitive advantage when compared to the iPad and later in the year, the iPad mini. Is it worth upgrading. Read our iPad Air 1st Generation review for that answer and more.

For some customers, that wasn’t enough, forgoing the retina display for the diminutive mini, which has had a smaller, non-retina display. Hoping to equal the playing field within its own product line, Apple has brought much of what people love about the iPad mini, to the iPad Air. It has also been afforded a small window of exclusivity as the new hotness, while we await the release of the much anticipated retina iPad mini. Are the changes enough to sway customers to go big or will the sea change see more customers switching to the second generation iPad mini. Read our iPad Air 1st Generation review to find out.

Every aspect of how this device feels has been changed, for the better. The weight of the iPad Air is 1.05 pounds, a drop of .39 pounds. To put this in perspective, the iPad 2 weighs 1.33 pounds. The iPad Air finds itself closer to the iPad mini at .68 pounds than the iPad 3/4. Much of this reduction is courtesy of the much smaller 32.9 WHr battery. Despite the smaller battery, Apple maintains the exceptional battery life rating of up to 10 hours of battery life. During my usage, I can attest to the stellar battery life that has become a staple of the iPad. You can use it all day long, without needing a charge. Yet another benefit to the smaller battery is the decrease in depth from .37-inches to .29-inches. When holding the iPad Air vertically, the left and right bezels are noticeably smaller going from 7.31-inches to 6.6-inches. The last two generations used tapered edges, allowing for a thinner appearance closer to the edges. This year’s model seems disinterested in manufacturing tricks to create the illusion of being thinner. Instead, Apple has used a myriad of manufacturing prowess to create a thinner device. For example, the display and touch panel no longer need two glass panels, instead using optical film for the touch panel. Improved efficiencies allow for the same brightness using less LEDs. It adds up to a 1 pound device that is 28% lighter, 20% thinner and 24% less volume that its predecessor.

There are welcome touches that show themselves in a product that looks and feels more refined. The silence/rotation lock, power and volume buttons are all silver. Button presses and switch are especially crisp, the feel of precision that we have come to expect from a high-end Apple product.

The iPad Air has an oleophobic coating to help prevent fingerprints. When powered down, it’s evident that more work needs to be done to reduce fingerprints. I should note that fingerprints are only noticeable when the device is not turned on. Apple’s new Touch ID home button is still exclusive to the iPhone 5s. While it would have been a nice addition, the appeal is limited to those who carry their iPad everywhere. Expect Touch ID to be one of the improvements with next year’s model.

What’s Under The Hood

The iPad Air includes Apple’s latest A7 processor and M7 motion coprocessor. The same chipset that debuted in September on the iPhone 5s. I ran both through Geekbench 3 and found the iPad to have slightly better performance. Apple has certainly tweaked the iPad Air to push the boundaries of the A7 chipset even further than on the iPhone 5s. The speed and performance of the iPad Air proves this out, absolutely trouncing the fourth generation iPad. The new iPad is incredibly fast, smooth and responsive. iOS 7 feels at home on iPad Air, performing like a champ at every turn. Some of increased speed is due to using a 64-bit chip which benefits from the 64-bit architecture of iOS 7.

A teardown has revealed the iPad Air has 1GB of RAM. If you re-open a Safari browser with multiple tabs open, the Air will need to reload the sites as you select new tabs. An increase in RAM could easily resolve this, but that’s a minor complaint in the grand scheme of things. With the iPad mini as my reference model (keep in mind it is using internal components from the second generation model), the speed of the iPad Air becomes quickly apparent. This isn’t just a device that is billed as being fast based on software tests. It is a fast that you notice it with every tap, swipe and app opening.

It will run apps available today at a fast clip. More importantly, I don’t see this iPad getting old very quick. Apple took developers by surprise when they announced that iOS 7 would be 64-bit. As developers start to release apps with 64-bit support, your overall software experience will improve. The ongoing software updates, now at 7.0.3, should also include performance enhancements. By incorporating desktop class architecture and chipset, you can take comfort that if you should purchase the iPad Air, the internals should future-proof your investment.

By incorporating two antennas and MIMO (multiple-input, multiple-output) technology, Apple claims the iPad Air can reach download speeds of up to 300 Mbps, or double the data rate of previous models. WiFi and network access is a tremendously important aspect of any tablet. Using Speedtest on my home network (ASUS RT-AC66U), I ran a number of tests with both iPad Air and iPad mini. On all but one occasion, the iPad Air outpaced the mini. I have Verizon FIOS service offering 50/20Mpbs and the Air came very close to reaching the maximum levels of my service. What you’ve read up until now is in line with how this device has been billed. The iPad Air is lighter, thinner, faster. That’s all great, but how is it to use the Air? I think much of how the Air is perceived will be based on you and more specifically, what device will the iPad Air be replacing? If it’s a full-sized tablet, the immediacy of what Apple’s done on both hardware and software design fronts should have an immediate impact on your overall experience. iPad mini users might have a more difficult time finding appreciable benefits, other than the larger display. To them, and I count myself in this group, the iPad Air feels big and dare I say, a little heavier than I would prefer.

This looks and feels much like a bigger iPad mini.

I’ve become a thumb typist and have a tough time with that on the iPad Air. It can be done in portrait mode, but my comfort level was just slightly less than I would have liked. In landscape mode, you will likely need to use two hands. If you plan on reading extensively with the iPad Air, one hand can be used to hold it provided it is propped up on a knee. I cannot see this being held with one hand for an extended period of time without causing some level of discomfort. There has been some debate as to whether the iPad Air could act as a laptop replacement. For seniors who do light email and browsing, I could easily see an iPad Air as their main PC. The onscreen keyboard could prove to be a hurdle if you do any extensive typing, but there are a number of solid keyboard options (see Logitech Ultrathin Keyboard Cover Review). With a compatible printer or third party software, it’s easy enough to print from the iPad. I’d recommend reviewing what apps you currently use on your existing PC. Is there a comparable solution for iPad? One hurdle to making this transition could be storage and connectivity needs, such as digital camera. While you can do everything on an iPad, that doesn’t always make it the best technology choice.

The larger 9.7-inch retina display makes for an ideal companion for watching movies, streaming Netflix and viewing photos. The text is super sharp. While my comic book reading days are long gone, a recent download of The Batman Files served as a great example of why this serves as an ideal reading device for graphic novels and comics. If you count yourself among those who are couch surfers, the larger display will save you from having to constantly pinch and zoom to read text. This screen size is suited perfectly for browsing the web. Cons:
Not light enough to be a one-handed device
More RAM would be nice

The more time I spend with the iPad Air, the more I think of this as the iPad Apple always wanted to build. The first generation iPad went on sale on April, 3rd, 2010. When you hold the iPad Air in your hands, it’s hard not to be amazed by the advancements in software and hardware design over the last three years.

With the iPad 3/4 and iPad mini, I always felt like you had to make compromises. If you wanted a retina iPad, you had to contend with a device that was heavier and require longer charging times. If you wanted lighter and smaller, you had to suffer with a middling display. The new line of iPads are no compromise devices. It’s impossible to make a bad purchase decision. When you line up the specifications, there is very little variance between the iPad Air and iPad mini with retina display. These two products are separated only by display size. Prospective buyers should focus on what size works best for them based on past tablet usage patterns and expectations of how a new tablet fits in their technology ecosystem.

The iPad Air redefines the category Apple effectively built. It’s a full-sized tablet, that is unmatched in its power, build quality and design. It’s the iPad we all know and love, but better in every way imaginable.