After just few months since I conducted a review of the third generation iPad, Apple took many by surprise by introducing the iPad 4 or fourth generation iPad. With the decision to drop the 30-pin connector for the shiny new Lightning connector on the iPhone 5, there was plenty of scuttlebutt that perhaps we’d see a minor revision of the iPad 3, to include the new connector. A quiet, but necessary update to get their all of their product portfolio updated to using Lightning. Apple’s recent special event saw the iPad mini announcement, but perhaps the most surprising news was the iPad 4. So what’s new and does Apple’s iPad 4 still reign supreme in the tablet marketplace? Read on for our full iPad 4 review.

Physical Appearance
When I arrived at the Apple Store in Annapolis for the product launch, the first thing I noticed was the fervor and marketing to promote the new iPad mini. This is understandable given the exciting new form factor its irresistible cuteness. Sitting next to them was the new iPad, but you wouldn’t know that it had received an update. No signage made mention of the big fella. As was the day before, it was simply known as iPad. 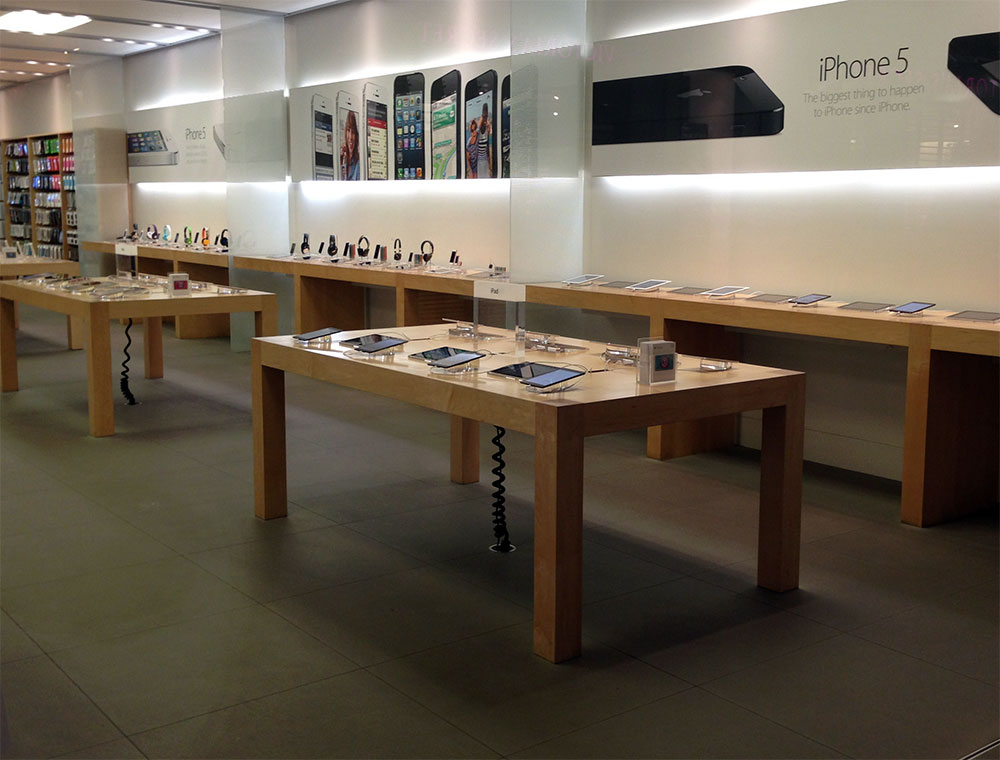 Outward appearance of the iPad 4 is identical to that of the iPad 3, save for the aforementioned move to the Lightning connector. The back is all aluminum with a black reflective Apple logo. The Lightning connector is at the bottom of the iPad 4, adjacent to the single speaker. Performance benefits (syncing speeds) have been minimal in my experience. The one big plus for this connector is that is not orientation specific. No longer do you have to look for the side which is right side up. There is no wrong way to plug in the Lightning connector. It’s small, which helps Apple as they continue to make devices thinner and lighter. Neither of those improvements can be seen with this revision. The volume coming from the speaker is sufficient, but I found the shorter mini provided sound that was louder, which is an advantage when watching movies.

At the middle of the device, the depth is .37 inches and it’s tapered at the top, bottom and sides. The right top is a silent/screen rotation lock switch and a single rocker switch that controls volume. This is in contrast to the iPad mini, which uses individual buttons for volume up and volume down. At the top is the 3.5mm headset jack, microphone and on/off, sleep/wake. One complaint that I had with the iPad 3 was the increase in weight of about 10 grams. It doesn’t sound like a lot, but it definitely hampers ones ability to hold the iPad 4 for long amounts of time. It could be my puny wrists, but I surprisingly had similar feelings about the iPad mini, despite its much thinner, lighter frame. Both are world class tablets, that are much more than an eReaders, so these complaints are minor. Ruined By Retina
During my review of the iPad mini, I swore off using any retina devices (okay, I’m not counting the iPhone 5). The idea here was to review the iPad mini without any preconceived notions of the ‘perfect’ display. Outside of the typography, which was most prevalent in iBooks, my eyes were pleased with the 163PPI (pixels per inch). Powering on the iPad 4 and its 2048 by 1536 display at 165PPI, it didn’t take very long for the fourth generation iPad to literally ruin my experience with every non-retina display. It’s that good. Gorgeous. Beautiful. Stunning. I find that I’m in need of new adjectives to describe retina on a 9.7-inch tablet. As good as movies, apps and photos look, the real shining moment for this display actually comes when viewing type. It can be an iBook, email or web page, type is pixel perfect. It’s crisp, smooth and shows zero jagged edges. When you think of how you interact with your iPad, this is a pretty major selling feature that shouldn’t be overlooked. It is that good and it makes others, including its baby brother, appear middling at best. There are plenty of features that make the iPad 4 stand out, but for my money (literally), it’s the myriad of beautiful pixels that greet me every time I turn it on. Regardless of what kind of user you are, you’ll benefit from this display. Early Adopter Burn
Apple chose to use the older A5 used in the iPad 2 for the iPad mini. Me thinks they were crunching numbers here, figuring out how to price it within the product portfolio while maintaining a good profit margin. It would certainly stand to reason that they could have adopted a similar strategy with the big boy. Add Lightning and quietly replace the existing third generation models on the shelves of the Apple Store. There wasn’t any fanfare surrounding this launch, so it would seem plausible that a stealth update would work fine here. Not the case, much to the chagrin to those who recently purchased the iPad 3. When you buy a product, there are no guarantees that it’ll be the latest and greatest for a prescribed amount of time. When companies shift gears and speed up a particular upgrade cycle, it stings. I remember when Apple dropped the price on the first generation iPhone. That right there was vintage early adopter pain. It happens with TV’s, refrigerators, computers, phones and tablets. There is always going to be a next product. More often than not, it’ll be better than the previous model. Apple has been relatively easy to guesstimate product updates. This is specific to Apple. Google Nexus 7 owners who purchased the 16GB model for $249 have seen Google release a 32GB model for the same price. As a consumer, you have every right to feel the burn, but it’s the nature of the beast.

What are the storage capacities?
You can select (3) storage configurations. 16GB, 32GB, 64GB in either black or white.

Faster wireless networking with 4G LTE
For an additional $129, customers can opt for either an AT&T or Verizon 4G LTE compatible new iPad. This will allow you to use your new iPad outside of a WiFi network, provided you have an associated wireless plan with your preferred carrier. The maximum download speeds are 42 Mbps with DC-HSDPA and up to 21.1 Mbps with HSPA+. These will start shipping on or around November 16th.

What’s Under The Hood
The iPad 4 features a new dual-core A6X chip, an upgrade from the previous A5X. Both have 1GB in RAM. This new processor brings with it graphics and CPU processing that is up to twice as fast as its predecessor. Using Geekbench for benchmarks, the high water mark was a 1774 Geekbench Overall Score. The iPad 3 sees Geekbench numbers around 750. When I reviewed the iPad 3, I did a fair amount of testing with graphic intensive apps. There wasn’t any noticeable lag or anything to indicate a lack of processing power. Apple simply believes that faster is better and I have to agree. The A6X was ready, so they pushed it out with the iPad 4. Using games like Modern Combat 3, the graphics were smooth, fast and the device responsive to my every move. Enemies in this game must hate this processor, because my moves were lightning fast.

The good news here is that the iPad 4 provides a bit of future proofing, as games and productivity apps start to require more processing power. The mere availability of this new A6X could see developers pushing the boundaries and the iPad 4 is ready for anything thrown at it.

One of the product features of this particular iPad is the inclusion of advanced Wi-Fi technology. Given the iPad can only access the Internet for wireless, any improvement to those speeds will be a welcome addition. What makes this possible is support for dual-band (2.4 GHz and 5GHz) 802.11n and channel bonding. With only an iPad mini and this device on hand, I was unable to test speeds against the 2/3. However, I did use Speedtest.net to compare with my wired connection. I have a Verizon FIOS 50/20 plan with an Airport Extreme. I’m able to come very close to those numbers using a Mac Pro wired using Cat6e directly to my router. I tested the iPad 4 on the my first floor and also stood next to the router which is in my basement. There was only a slight difference in speeds, with a 2.00 Mb/s improvement in both down and up, although I was able to hit peak speeds without standing directly next to the Airport Extreme. Speeds were roughly 22.00 Mb/s for download and 16.00 Mb/s upload. iOS 6 and App Store
Apple bills it as the most advanced mobile operating system and we’d have to agree. iOS 6 shows years of refinements that pay off with robust feature set and it’s incredibly easy to use regardless of skill level. It’s also incredibly stable and just works. This allows the operating system to stay out of the way, while you enjoy the myriad of apps, 275,000 available for the iPad alone. This is not a case of quantity alone, the level of depth to apps for the iPad is astonishing given the relatively low-cost you’ll pay for an app. Even games that cost $4.99, which in iOS is considered expensive, are a value. iOS is a mature operating system and part of the maturity comes from the layering of new features. This makes it difficult for Apple to providing any new features or updates that are ‘revolutionary’. Some would use the word ‘stagnant’, which isn’t entirely appropriate. Nothing to date offers such a complete experience as iOS and Apple’s App Store. If at some point there is a fork in the road (old iOS, new iOS), having the added horsepower of the A6X might come in handy, providing for compatibility. That’s all here say at this point, with nothing imminent or even rumored.

Cameras
One of the major uses of an iPad is to make video calls which Apple calls FaceTime. Initiating a FaceTime call couldn’t be easier and the front-facing iSight camera gets a boost to 720P HD. You’ll be pushing out a higher quality image for your friends and family. It also takes a rather decent self-portrait, if that’s your sort of thing.

One the rear is a 5 megapixel camera left over from the iPad 3. Under the right conditions (still subject, good light), I was able to capture some very good quality images. Videos are shot at 1080p. I rarely take photos with an iPad. If you do, you’ll be more than pleased with the results. The size of the iPad does make it awkward to frame shots if you are trying for a close-up. It will work perfectly for family portrait, where you have the room to stand back and take a photo. It’s not a terrific photo taking experience, but the quality is there if you should need it. Conclusion
In late March, 2012, we gave the iPad 3 a score of 9. That’s close to perfect and the fourth generation iPad edges closer, but it’s not there yet. Apple has upgraded the processor in the iPad 4 to the A6X, offering up to twice the processing power found in the previous model. Combined with upgrades to the front-facing camera and promises of faster WiFi connections, these are welcome improvements. They don’t however address the issue of heft, which one could assume is a difficult engineering feat. The fourth generation iPad (2012) continues its march towards perfection and still reigns supreme as the absolute best tablet available today.