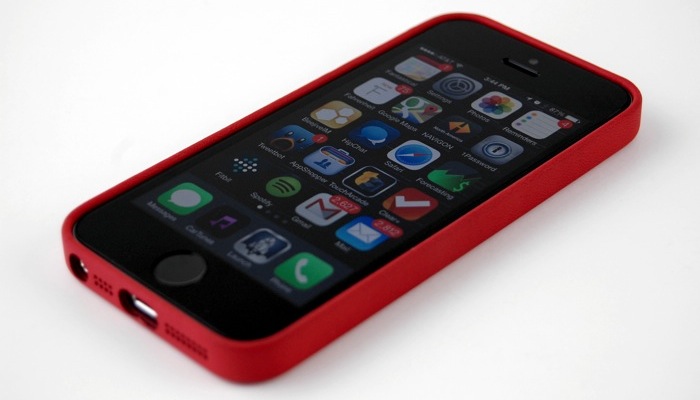 When Apple announced the iPhone 5s earlier this month, the consumer electronics giant also introduced a case made to complement its new flagship iOS device. Made from premium leather, Apple’s iPhone 5s Case is available in brown, beige, black, yellow, and red and retails for $39. What follows is our in-depth Apple iPhone 5s case review.

This isn’t Apple’s first foray into iPhone cases though it hasn’t made very many over the years. Apple made a leather sleeve for the first-generation iPhone and a bumper to help address Antennagate, a signal attenuation problem with the iPhone 4. Other than this, Apple has largely left the case market to other manufacturers, who have gleefully flooded the market with cases in almost every size, shape, and material you can think of. I purchased the PRODUCT (RED) color when I ordered my iPhone 5s and it arrived the day after my iPhone 5s did. As you’d expect from Apple, the case is perfectly fitted to the iPhone 5s and understated, bearing only the Apple logo impressed on the back of the case and a few lines of text on the inside of the case. Since other companies technically can’t use Apple’s logo without its permission, using a case on my iPhone before always meant that the logo on the back of the phone was hidden (yes, there are cases with cut-outs for the logo but I think those are ugly and never bought one). It’s a small thing and perhaps a little silly, but I’m delighted to finally have a (bona fide) case with an Apple logo in exactly the right place.

Placing the iPhone in the case is straightforward –– you just press it in gently. I’d recommend you start with the corner with the volume buttons to make sure they don’t get damaged. The case fits very snugly and definitely won’t come off unintentionally during normal use. It’s slim and doesn’t add much bulk to the phone at all. The case’s box says it’s made from “natural aniline leather” and Apple’s site states the dye is “infused into the leather” so it shouldn’t rub or scratch off. The grain of the leather is fine and isn’t too visible unless you look closely. It’s matte and offer excellent grip, which I appreciate a lot since a naked iPhone 5s can be slippier than snot.

The inside of the case is lined with microfiber and won’t scratch your iPhone at all unless you’re careless enough to let sand or other grit get in there and rub against it.

I have encountered a problem so far with the leather and it’s that it picks up dirt and dyes far easier than I expected. I wear dark jeans and default to keeping my iPhone in my back pocket most of the time and found that only after a few days, it was picking up the dye from my jeans on the edges.

I was able to get it off with a damp paper towel and pencil eraser but it’s still a bit disappointing and though I really like the red, I’m glad I didn’t get one of the lighter colors and almost regret not getting the black one.

On the exterior of the case, the volume and sleep/wake buttons are covered but there are raised outlines over them so you can easily locate them by feel alone. The buttons are still easy to press so the leather doesn’t really hinder access at all.

For the ring/silent toggle, there’s a cut-out and while it’s not very deep since the case isn’t very thick, it still takes a fingernail to flip and it’s unlikely you’ll switch it accidentally. On the bottom, Apple opted for more coverage with precise cut-outs for the Lightning and headphone ports and the speaker and microphone. While I generally appreciate a case that offers more coverage when I’m looking for protection, Apple wasn’t very generous with the cut-out for the Lightning connector, making it just barely large enough for the .2m Lightning to 30-pin Adapter, which I use in my car and has a slightly larger casing around the connector than the Lightning cable that comes with the iPhone. A 10-foot MFi certified Lightning cable I purchased online has an even larger casing around the connector, making it unusable with this case.

I haven’t encountered any similar issues with the headphone port so far and am able to use some Incase headphones with thicker casing around the connector than Apple’s own headphones without any trouble. If you use other headphones with your iPhone, this is something you’ll probably want to test out in an Apple store first before plunking down $39 for this case. For the camera lens there’s a large pill shaped cut-out lined in black plastic to avoid reflection issues with the flash.

On the front, the case just barely extends past the edge of the screen so you can place it face-down on a table and the screen won’t touch. It doesn’t wrap around the screen at all and shouldn’t interfere with most screen protectors. I’ve got a Spigen SGP GLAS.t screen protector (which is one we highly recommend ––check out this review) on the way and will update this review if there are any problems with it.

A little bit on the case’s price: When I first saw it during Apple’s event, my first thought was that it was too expensive –– there are plenty of other cases out there that offer more coverage or protection or even style, depending on your tastes, and cost less than $39. But in thinking about it a bit more and looking at other comparable leather cases on the market, it’s actually right in line and even less expensive compared to offerings from Piel Frama, Sena, and others.

Using the iPhone 5s in this case is, in a word, pleasant. It fits perfectly, offers great grip, and has a simple yet elegant design and I recommend it. The case is meant to offer basic protection so if you’re clumsy and drop your iPhone a lot, you’ll probably want to get something more robust. And if your job or hobbies result in dirt on your hands that the leather of this case seems to attract far too easily in my experience, you may want to opt for something else.